Since its inception in the late 1960s, video art has been slowly growing in popularity. It’s a medium that relies on using video technology and can take many forms, including installations viewed in galleries or museums. Today, projection is being used by an increasing number of artists, including Sondra Perry.

Video Artist, Sondra Perry, constructs multifaceted narratives that explore the imagining, or imaging, of blackness throughout history. Often taking her own life as a point of departure, she creates works that revolve specifically around black American experiences and the ways in which technology and identities are entangled.

She is currently exhibiting “Typhoon coming on” at the Serpentine Gallery – the first solo presentation of her work in Europe. Perry has created an immersive environment with a newly-conceived soundscape to accompany her animation. Featuring a digitally manipulated image of J.M.W. Turner’s 1840 painting Slave Ship (Slavers Throwing Overboard the Dead and Dying, Typhoon Coming On), the original work depicts the drowning of 133 slaves by the captain of the British slave ship, Zong, to claim compensation for these ‘goods’ under the salvage clause of the ship’s insurance policy.

With viral imagery of black deaths in the US both sensationalised and the subject of widely disseminated memes, Perry wants to reclaim this digital space by foregrounding the use of technologies in her work. Given that video is essential to the exhibition’s success – as projections make up the main works in the show – Sondra’s artistry needed the right equipment to bring her idea to life, which is where Epson came in.

Somerset House Trust, Lisson Gallery, National Portrait Gallery, Frieze Art Fair – to kit the gallery space out. Taking place over the North and South Powder Rooms, surrounded by the North, East and West Perimeter walls, the exhibition brief was simple: fill a 3.6m wall space, floor-to-ceiling. The perimeter gallery space is only 4m wide, with lightwells in the ceiling, so the only way to make the image large enough was to use ultra-short-throw lenses to create fully immersive projections.

The artist, Sondra Perry, has previously only shown this work as a three-channel edge-blended projection, but the space at the Sackler Gallery lent itself to continue the projection around the whole perimeter walls to engulf the viewer and provide a fully immersive experience – a challenge that Epson more than met with its projectors.

The exhibition consists of the following:

Typhoon coming on, an immersive environment with a series of seamless projections coursing through the gallery space, accompanied by a new ambient soundscape. The projected videos begin with an animation of an ocean. The ocean is purple, as is the colour warning that appears on the software when there is an error with the simulation. The animation then blends into a digitally manipulated image of J.M.W. Turner’s 1840 painting Slave Ship.

Graft and Ash for a Three-Monitor Workstation, which is modelled on a bicycle workstation and confronts the viewer with Sondra Perry’s own avatar. Three flat panel video screens are positioned above the handlebars with a bald avatar delivering a monologue on the contradictory definitions of success offered by contemporary capitalism.

Wet and Wavy – Typhoon coming on for a Three-Monitor Workstation, a water-resistance rowing machine – its chamber filled with hair gel – which reveals images across the attached screens of purple computer-generated images of waves and extreme close-ups of the sea in J.M.W. Turner’s 1840 painting Slave Ship. Sounds of chimes and loud distorted voices accompany this piece, creating a dizzying effect.

Resident Evil, the last part of the exhibition, is an installation that features Perry’s signature use of Chroma key blue walls in her exhibitions across another projected animation of an extreme close-up and modified image of her skin. The monitor positioned against the backdrop of her ‘Skin Wall’ shows Resident Evil (2016), an audio-visual collage of footage depicting police brutality as reported by victims and protesters juxtaposed with excerpts from Fox News.

A picture speaks a thousand words

ADi turned to Epson to kit the gallery space out, recognising that its ultra-short-throw (UST) lenses and laser projectors were the only viable way of meeting the exhibition brief.

“I knew it was a no-brainer – it had to be an Epson projector,” said ADi’s Sara Smith, an experienced visual engineer who looked at smaller desktop projectors before making her decision.

Having worked with Epson projectors previously, she knew they would be perfect to meet Perry’s projection needs. Epson’s UST lenses have a zero offset, meaning that the body of the projector could be mounted to the ceiling and still fill the entire wall. This is in comparison to other UST lenses, which have a larger offset – making them unsuitable for the project, as the projection wouldn’t have filled the required space.

“Epson’s projectors are extraordinary in that the lens is shaped like a snorkel and bends under the body of the projector – which means that it can shoot back up and has so much lens shift, allowing the image to be raised. The projections in this exhibition have to be projected right to the top of the wall – it was a crucial requirement to ensure that it was as immersive as possible – and Epson’s products offered the perfect solution.”

Epson’s 8 and 12,000 lumens laser projectors were bright enough to make the large scale of the image, with 3LCD panels creating optimal colour reproduction. The geometry correction in the projectors meant accurately lining up images was fast and effective.

With four composite parts to Sondra’s work, ADi needed to find a range of projectors that would meet all of its different needs – and Epson’s variety has done Sondra Perry’s installation justice. It’s clear that exhibition visitors feel the same way, with art-lovers commenting that they were ‘captivated by the wall projections’ and that the projection’s ‘continuity was outstanding’.

The piece has also received acclaim from the media, with the Evening Standard dubbing it “bold, brilliant and gut-wrenching work” and Bomb Magazine saying, “Perry’s aim is to give agency to the black meme, imbuing it with a radical purpose that no longer infects just the internet but physical space”.

With Sondra Perry’s ‘Typhoon coming on’ installation showing until 20th May 2018, Epson will continue to play a key part in immersing art-lovers in Perry’s fascinating work. 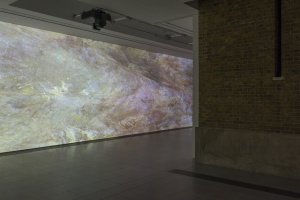