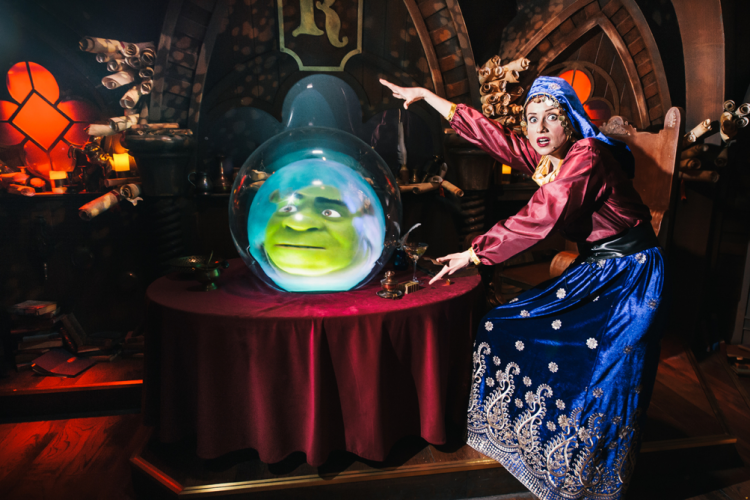 How do you bring an animated character’s world to life in an attraction? One that’s the most successful ever created; that’s grossed £3.5 billion at the box office; and that’s loved by children (and their parents)?

Such was the brief set by Merlin, and DreamWorks, when it approached seeper, a pioneering London-based firm specialising in creating engaging immersive installations, to create a series of experiences for its new Shrek attraction on London’s South Bank.

The experience takes 90 minutes and involves the interaction of character actors and breathtaking technology as visitors work to get safely home and avoid the attention of Rumpelstiltskin’s witches. Building the environment that would do justice to the Shrek world created in people’s imaginations by the big screen was just part of the brief. As its managing director, Ed Daly explains:

“We were involved early in the project, working alongside Merlin and DreamWorks on practical ideas to influence the script and drive the innovation needed. This was a very enjoyable part of the process, with ideas bouncing back and forth. We also had some challenges to think about – not least working within the confines of limited space and within a building whose historical status is protected by English Heritage. Our overall goal was to produce an experience that was indistinguishable from magic, that transports you to a place far, far away and that leaves lasting memories.”

To make this magical place, one that makes visitors feel part of the fairytale land of Shrek, complete with favourite characters Donkey and Princess Fiona, seeper used a combination of Epson projectors along with animation, lighting, sound, advanced software and 4D effects. The 4D experience included physical stimuli such as wind, fog and smells to pique the senses. It helps fully immerse visitors into this totally Shrektacular space: a space that’s the most technically advanced attraction Merlin has ever produced.

The fantastical comes to life

While projection was always going to be a key part of the experience, seeper wanted to take it further. So rather than having large screens simply displaying video content, the team looked at ways of using projected images to create a richer, more sensory experience, with a feeling of 3D depth.

seeper achieves this by having characters projected onto backgrounds – effectively turning objects into a projection surface – using its innovative projection-mapping software. The overall effect is to create a hologram-like impression. Projection mapping is used throughout the attraction. A good example is a scene with a fortune teller where Shrek’s head appears to be floating inside her crystal ball in what looks to be a true 3D image. Here seeper surrounded a spherical projection with another hard clear sphere to create the illusion of the content being inside the ball, rather than on it.

And, in another scene, Puss in Boots dances down the bar of a pub, slicing the tops from beer bottles with his sword while liquid is sprayed into the audience. He also appears to spit out a real furball that an actor, in the guise of the landlord, catches. Ensuring that the position, speed and timing of the actor’s gags aligned with the animation was challenging and required extensive tweaking.

Technical demands were also high in the final area of the adventure: a magical portal where the audience enters a 360º projection space that transports them back to London. Says Ed Daly: “This space was very challenging. Imagine a small room with a low ceiling, only just big enough for the 40-strong audience; getting a 360º projection coverage in here was near impossible. It took about 20 iterations in CAD to find a way to position the projectors without the audience shadowing. Given the importance of projection in the attraction, we opted to install a large number of Epson projectors throughout, including eight EB-G6900WU professional installation projectors with 6,000 lumens brightness in the portal room.”

A number of criteria influenced seeper’s choice to install Epson projectors. Paramount was image quality and brightness – especially as the attraction is situated in a low-light environment.

“The Epson units we selected offered high brightness – from 6,000 up to 10,000 lumens – with full HD performance and Epson’s 3LCD technology. There’s also good flexibility with the units in terms of edge blending, geometric correction and vertical and horizontal lens shift, which is useful when projection-mapping onto complex surfaces,” comments Ed Daly.

The 3LCD technology uses three chips to deliver up to three times the brightness, and up to three times wider colour gamut of comparable 1-chip projectors. The effect is the creation of vibrant, true-to-life colours and crisp, clear images – performance that’s essential in the Shrek attraction that’s so reliant on the moving image to captivate viewers.

In addition, many of the rooms in which scenes take place are small – so Epson’s additional ELPLU01 short throw lenses, capable of projecting big images in tight spaces, were selected – while other factors also influenced the decision to select Epson. These included the fact that the units integrate HDBaseT interfaces to reduce cabling (network, control, audio and video are combined in one cable) and are supplied in a black chassis to conceal the installation. What’s more, the projectors’ network connectivity allowed seeper to monitor their performance and lamps remotely to deliver against its objective of not only making a magical place, but one that’s easy to control and manage.

A single system controls the entire attraction, allowing management of everything from the smell and smoke effects to the sound and lighting from a tablet on-site. seeper is alerted remotely if the system needs attention, minimising the risk of any disruptions to the experience.

“We set out to make the attraction easy to run, reliable and also efficient,” concludes Ed Daly. “All the technology talks to the central show control system. We custom designed web-like control panels so the on-site team can walk around the attraction on a smartphone or tablet and monitor supplies or trigger elements of the show. Also, the actors themselves progress the narrative of the show. Using hidden buttons, lights and sounds the actors are cued in sync with the rest of the attraction and able to do things like open doors and switch on lighting, sound, video and gag cues as needed. For the visitors, this makes for a seamless experience where things magically happen. The Epson projectors are an important part of the show, and their image performance along with professional installation features made them an ideal choice as we bring a far, far away land to the heart of London.” 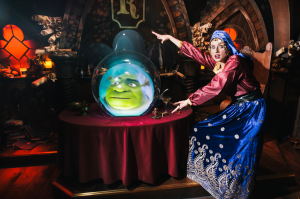 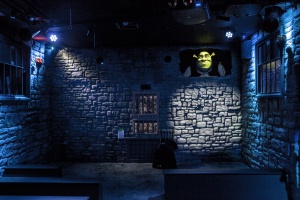 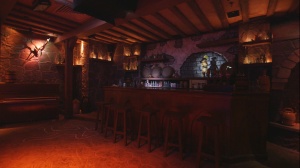 Puss in Boots in the Pub 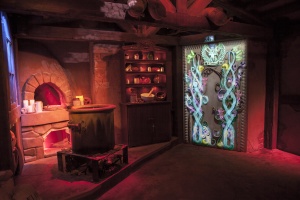 Muffin Man and the Magic Door 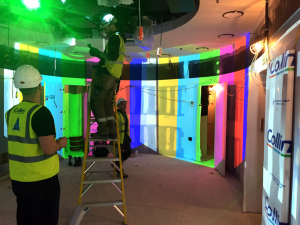