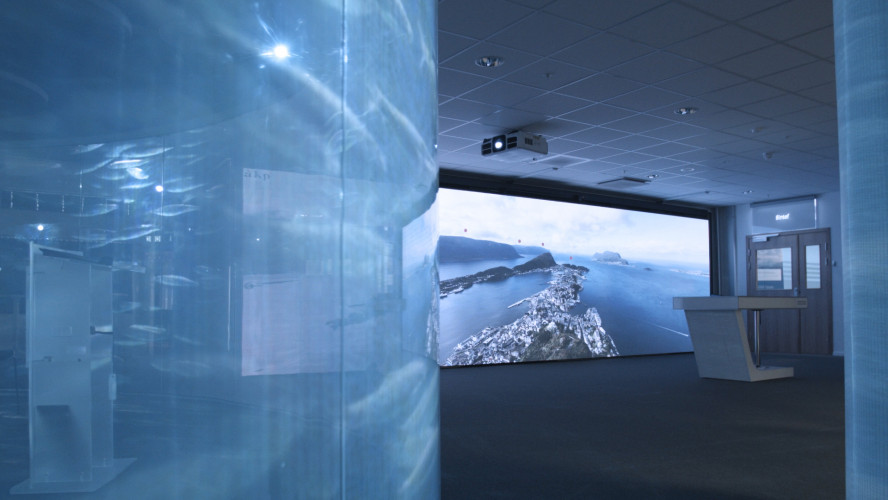 Epson laser projectors are being used for advanced simulation and visualisation solutions to help shape the future of the maritime industry.

At Campus Ålesund in Norway, businesses and research and educational environments develop innovative technologies and shape the future of the maritime industry. It is using its 30 Epson laser projectors for advanced simulation and visualisation solutions for companies such as Rolls-Royce.

Campus Ålesund’s vision is to become one of the world’s leading environments for the development of new maritime technology. The new, state-of-the-art building complex of the Norwegian Maritime Competence Centre houses around 900 employees in twenty highly skilled businesses, the largest of which are Rolls-Royce and Inmarsat Solutions.

Simulation and visualisation technologies play a key role on campus. There are dozens of highly advanced simulators which can be linked together to train crew members and connect ships in integrated operations.

Most of the solutions are supplied by the Offshore Simulator Centre (OSC) that develops solutions for meeting rooms and visualising maritime operations. Among other things, OSC supplied a series of advanced simulation, visualisation and meeting room solutions in the building for Rolls-Royce, NTNU and the ÅKP Blue Innovation Arena. Epson laser projectors form an important part of these solutions.

“We evaluated a series of projector manufacturers, and we chose Epson's EB-L1100U because of its image quality and price. It was also important for customers that the laser projectors should require very little maintenance. What’s more, 3LCD technology is very bright, which is important for projecting onto foil,” says Bjørn Aase Dimmen of OSC.

OSC has 30 Epson projectors in total so far, all EB-L1100Us. This is a high-end, 6,000-lumen WUXGA laser projector with 3LCD technology that provides rich, vivid colours and an equally high white and colour light output. The laser light source has a service life of as much as 83,000 hours and the projector is supplied with a warranty of 20,000 hours or five years.

The most advanced in Norway

The Arena's most striking feature is a 65m² room for meetings, visualisation and simulation. The room has all glass walls with a transparent, conductive foil and nine ceiling-mounted EB-L1100Us. This allows it to transform at the touch of a button to a 360-degree immersive projection surface totalling 80m² - equivalent to over 100 50-inch screens.

“The solution was developed for visualising large quantities of data and plays a key part in the development of control rooms for autonomous ships. It can also be used for high-end virtual prototyping and spectacular, attention-grabbing presentations,” says Senior Consultant Jan Børre Rydningen at ÅKP, the company behind Blue Innovation Arena.

ÅKP Blue Innovation Arena wanted to base its unique solution on the best that the market had to offer, in terms of both performance and price. It chose Epson after seeing the company at the Integrated Systems Europe trade fair in Amsterdam where it showcased a range of high-end projector solutions and won the award for best large stand.

When the room is not in use, it can easily be converted into a gigantic profiling surface for visitors to the premises. The Epson projectors can also project images, messages and film onto the outer glass surface.

OSC has also installed an advertising and exhibition solution in the entrance hall. Two EB-L1100Us project images and film onto a 9x2.5 metre foil-coated glass backdrop.

Campus is also the site of the Rolls-Royce Fleet Management Centre, a high-end control and monitoring centre for shipping traffic. The centre analyses large quantities of data coming in from ships around the world in real time. This allows Rolls-Royce to optimise operations, troubleshoot, and fix any errors in ships and equipment.

The centre consists of a large curved wall and a foil-coated glass backdrop, where three ceiling-mounted EB-L1100Us project bright, sharp images and video.

Here too, OSC has installed a striking entrance to display promotion films about the company on a large screen, using four EB-L1100Us.

There is currently also a ship simulator for the Norwegian University of Science and Technology (NTNU) installed, using 12 EB-L1100Us.

Epson has been singled out by Futuresource Consulting as the world’s leading projector manufacturer for every year since 2001, and Epson also has a leading position in Norway. According to the analyst firm DMR, Epson was by far the biggest player on the Norwegian projector market in the first half of 2017. 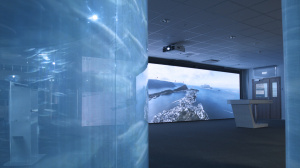 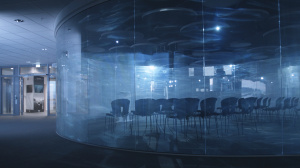 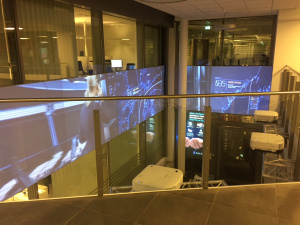 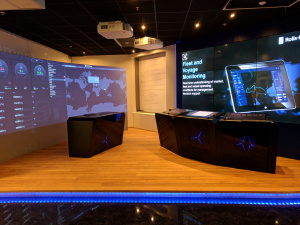 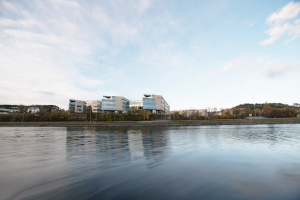